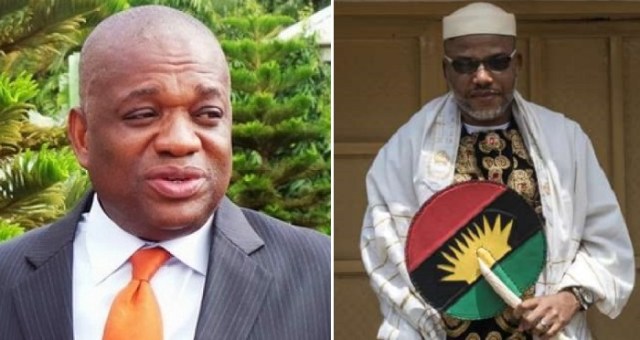 Former Governor of Abia State, Uzor Orji Kalu has stated that leader of the Indigenous People of Biafra, IPOB, Nnamdi Kanu rejected the advice he (Kalu) gave him (Kanu) while he was in Kuje prison.

The former governor said instead of heeding his advice to shun the struggle and embrace peace, the IPOB leader kept on organizing boys who raped girls, and establishing secret cults.

This is part of an interview Kanu, now a member of the ruling All Progressives Congress, APC, had with Punch.

He said, “I spoke with Nnamdi Kanu in the prison and gave him quality advice. I counselled him to embrace peace and agree with whatever terms that will set him free.

“I also warned him against allowing his boys to be displaying Biafra flags, coat of arms, organising parades, establishing secret security service, and mounting a guard of honour.

“I told him that by doing all these, his group had subdued the sovereignty of Nigeria and are therefore looking for trouble.

“No government on earth including the United States will allow any group to be championing the cause of dividing their country.

“I believe most sincerely that with the situation on ground today, majority of the Igbo do not agree on the issue of Biafra as a separate country.

“I have heard some elite, including professors who are saying that they want Biafra but they should know that there is no way such agitation can be achieved under the law.

“If willingly, we want to talk about constitutional amendment, then people can bring up various issues.

“Today, the creation of Biafra Republic is not feasible. The (Indigenous People of Biafra) boys have the right to express themselves but they do not have any right to engage in destruction of property, raping women or setting up a Biafran intelligence service.

“No country will allow that to happen. I am an Igbo man before being a Nigerian and I have no regrets being an Igbo man. I have lived outside Igbo land so I understand Nigeria. I sincerely want to say and maintain what I have said earlier that Biafra as a country is not an issue now.

“The issue is for the Nigerian government to give us justice and fairness. When some Igbo people cry of marginalisation, I tell them that if they go to other parts of the country, the people there are also crying because the story is the same. There is a wall between the rich and the poor.

“We don’t have any war of dialect or language. The rich people should start having a human face so that we can move the nation forward.

“I will not tell you a lie. Nnamdi Kanu did not agree with me at all on my views about his activities. I did most of the talking throughout the two hours and ten minutes that I stayed with him.

“I told him many stories about life especially some of the stories that the Ikemba Nnewi (Odimegwu Ojukwu) told me when he was alive and also explained lot of things to him based on my experience in life but didn’t agree with me.

“I had to cut short my journey when I heard what was happening between his boys and the military. I returned to the country on September 14 and came straight to Abia State on the 15th to make sure that we talked to the IPOB boys so that they would stop what they were doing and allow peace to reign.”