Home News Feed I Am Not Ooni Of Ife’s New Wife – Businesswoman | Video
Facebook
Twitter
WhatsApp
A woman rumoured to be having an affair with the Ooni of Ife has denied the story linking her with the monarch. 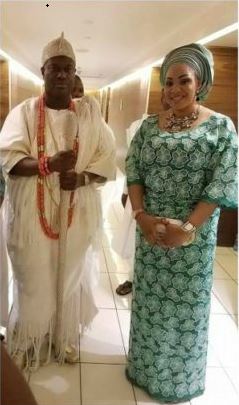 A beautiful Nigerian businesswoman, Emmanuella Ropo alleged to be secretly having an affair with the Ooni of Ife, Oba Adeyeye Enitan Ogunwusi, following the end of his marriage to his ex-wife Olori Wuraola has denied the report.
This comes after a viral report suggested that the Ooni of Ife, Oba Adeyeye Enitan Ogunwusi appeared to have found love again after his recent separation from his queen, Wuraola after he was spotted with Emmanuella at a high-society wedding in Lagos state.
Shutting down the news in an interview with FlipTV, Emmanuella said there is no truth to the rumour. She admitted meeting the Oba at a function but said nothing else happened.
Watch video below: