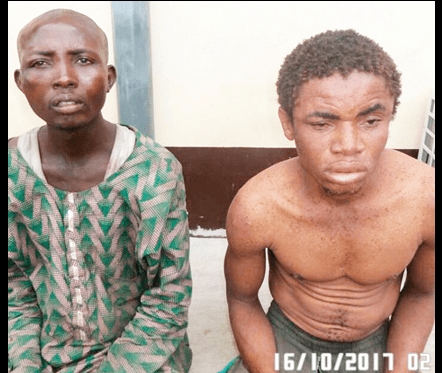 A kidnap attempt of a 2-year-old boy identified as Darasimi Tijani, who was allegedly lured by suspected kidnappers with N50, was on Monday foiled by Lagos Neighbourhood Safety Corp (LNSC) at No 90, Oyewole Road, Orile-Agege, about 9a.m.
According to a report by New Telegraph, it was gathered that the kidnappers realised that Darasim’s guardian, Mrs. Fathimo Balogun, went in to attend to the need of other kids, and passers-by, who learnt of the suspected the kidnappers’ sinister moves, raised alarm which led to their arrest by a mob.
The swift intervention of the LNSC officers saved the suspects from being lynched while the boy, his mother, Mrs. Wasilat Tijani, and the guardian were taken to LNSC station at Orile-Agege LCDA.
While speaking to journalists, the Public Relations Officer of the LNSC  agency, Afolabi Olayiwola, confirmed the arrest of the suspects and said:
“LNSC, at exactly 9.30a.m., upon an intelligence information received from the public, arrested two kidnappers at No 90, Oyewole Road, Orile-Agege who lured the little boy, Darasimi Tijani (two years old), with N50 note, when they realised that the guardian, Fathimo Balogun, quickly went in to attend to the needs of other kids.
“Passer-by raised the alarm and the LNSC officers moved to arrest and save the two kidnappers from being lynched by the public. We rescued the boy and the mother, Wasilat Tijani, with the guardian to our station at Orile-Agege LCDA along with the kidnappers.”
According to Ajao, a retired Deputy Inspector General of Police, preliminary investigation by the agency revealed that one of the suspects speaks Hausa while the other pretends as mad man.
“Our primary investigation revealed that one of the suspects is a Hausa man by name Muritala Lado, who claimed to be a tailor, the second suspect pretended to be a mad man but later mentioned his name as Bassey. They all confessed to have committed the crime. They have all been moved to the Agency Headquarters at Bolade Oshodi for necessary further action.”