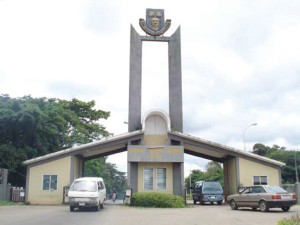 The Student Union Government of the Obafemi Awolowo University, OAU Ile-Ife, has demanded the “unconditional” recall of students recently suspended by the school.

Following a protest by some students of the university on October 5 over incessant power outage, three students were served suspension letters on Thursday.

According to the letters signed by the registrar of the school, Dotun Awoyemi, the students were suspended for alleged criminal activities pending the investigation of the police.

Two students, Omole Ibukun, a 500 level of Department of Civil Engineering and John Udeh, a 200 level student of the Department of Arts and Social Education were accused of “forcefully sending students out of the class under the guise of protesting an alleged unsatisfactory power supply, blocking of roads and hijacking of a bus of some of the members of the NURTW.”

The management had earlier that week suspended a Students’ Union officer, Oluwalade Babatunde, indefinitely for leading the said protest.

The union’s president, Ibukun Oyekan, while addressing journalists in Osogbo on Monday, appealed to the school’s management to recall the students in order to ”avoid any crisis on the campus.”

Mr. Oyekan read a statement signed by himself, the secretary of the union, Boluwajaiye Adeoluwa and its public relations officer, Okediji Simon.
Part of the statement said, “We use this medium to debunk lies and subterfuges that have been made against our members.

It must be clearly asserted at this point in time that students only embarked on a peaceful protest and what followed was their indefinite suspension from the University. The Union hereby demands the immediate and unconditional reinstatement of these students.

“We demand an end to an era of victimization of activists among the students on account of expression of their grievances and dissatisfaction over the current state of Obafemi Awolowo University campus.

“We demand that the University Management call the leadership of Postgraduate Hall as well as Great Ife Students’ Union to a roundtable discussion which must lead to quick, immediate and unconditional reinstatement of students on suspension among other issues.
“We demand the University Management to be more committed to facilitating a holistic improvement in the general welfare conditions of students on campus by ensuring stable supply of water and electricity on campus, standardisation of our laboratories and equipping the University library with updated books, as well as renovation of existing halls of residence and construction of new ones to decongest the population of students living off campus which is characterised with a very poor security network.”
The union also provided details of the affected students. saying, ”The suspended students are Omole Ibukun Ayodele, with registration number Cve/ 2011/ 042 of the Department of Civil Engineering; Jacob, Tosin Grace, with registration number: Law/ 2012/ 153 of the Faculty of Law; Udeh, John with registration number Ase/ 2015/ 362 of the Department of Arts and Social Sciences and Oluwalade Babatunde with registration number: Egl/ 2014/ 431 of the Department of English.”
A press release signed by the Public Relations Officer, PRO of the institution, Abiodun Olarewaju, said the students ”led some other persons in protest and violently disrupted academic and extra-curricular activities of the University by forcefully chasing other students out of the lecture halls under the guise of demonstrating against an alleged unsatisfactory power supply to the campus.”

The management also said that the students ”vandalised commercial transport vehicles of the members of the National Union of Road Transport Workers, NURTW, Ile-Ife, and drove two other vehicles and a Cabstar van, fully loaded with their groups, to More Police Station where other students, who were being interrogated by the police, were forcefully released by their group.”
Many opine that the recent spate of suspensions in the school is perhaps reminiscent of a trend in Nigerian universities where student leaders are punished for leading students to protest bad welfare conditions such as poor power supply, bad hostel conditions, and inadequate teaching facilities.
Similar suspensions in the past, have also been carried out at the University of Ibadan and the University of Lagos.
The suspensions are however unrelated to the recent suspension of two other officers of the OAU Students Union, one of which was mentioned in the SUG’s statement.
The vice president, Jacob Tosin, and director of socials, Adedayo Afolabi were suspended for engaging in violence over the sharing of about N3 million given out by the school.