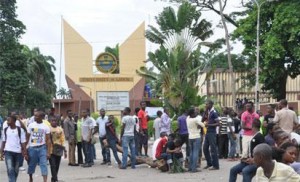 University of Lagos has appointed Oluwatoyin Ogundipe as the 12th  Vice Chancellor of the Institution.

This was made known in a statement on the official Facebook page of the institution on Friday night .

According to the report, the university has concluded the process for the appointment of a new vice chancellor which commenced on July 4 with the placement of advertisement in national newspapers.

“Pursuant to the Law, the Search Team, the Criteria Committee, the Short-Listing Committee, and the Selection Board conducted the exercise and three candidates were nominated,” the statement reads.

The statement said the institution followed the guidelines for the appointment of vice chancellors and provosts, as recommended by the Ministry of Education.

The three candidates that were selected are Oluwatoyin Ogundipe, Olukayode Amund, and Ayodeji Olukoju.

The statement said Mr. Ogundipe scored the highest mark in the exercise.

“At the end of the Governing Council meeting of Friday, 27th October 2017, Council approved the appointment of Professor Oluwatoyin T. Ogundipe.”

Mr. Ogundipe who was appointed a professor in 2002 became the Deputy Vice Chancellor of the institution on April 1, 2016.

Rahman Bello, the outgoing vice chancellor who is a a professor of chemical engineering was appointed on November 12, 2012 as the 11th vice chancellor. He is set to leave office in two weeks after the completion of his five years tenure.

The University of Lagos was established in 1962.