Home National News OMG!!!! Nurse caught in the act of having sex with a dead...
Facebook
Twitter
WhatsApp 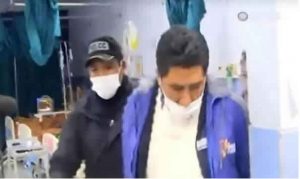 A male nurse was caught in the act of having sex with a dead patient in the hospital.

According to Mirror.co.uk, the grief-stricken husband gave the nurse a beating of his life before handing him over to the Police in Bolivian capital La Paz.

The 27-year-old nurse who was later identified as Grover Macuchapi, 27 is currently facing prosecution on charges of profaning a corpse and obscene acts.

The police chief, Douglas Uzquiano, said the incident happened around an hour after the patient died at Hospital de Clinicas in La Paz on Monday and was transferred to a hospital morgue.

He said, “Relatives of the dead woman had gone to the hospital to cancel a debt they had for the medical treatment she received.

“The husband went to the morgue and saw a male nurse having sex with his late wife.”

The unnamed husband told a local newspaper: “I saw what he was doing and hit him. He was moving and he had his trousers down.”

The hospital worker blamed his actions on a trance.

He was quoted as saying: “Something happened. It was like a dream. The next thing I remember was feeling a blow from behind when the woman’s husband hit me.”

The unnamed female patient, a 28-year-old, had only died around an hour before she was targeted.

Prosecutors said Macuchapi could not be charged with necrophilia because the offence didn’t exist under Peruvian law.