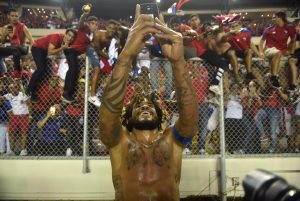 President of Panama,Juan Carlos Varela declared a national holiday in celebration at the Central American country’s first ever qualification for the World Cup.

“It’s a historic day for the country. Tomorrow (Thursday) will be a national holiday for public and private sector workers,” Varela said on Twitter on Wednesday.

Panama came from behind to beat Costa Rica 2-1 on Tuesday and book a ticket to Russia 2018.

The victory left them third in the CONCACAF area qualification behind Mexico and Costa Rica, and sensationally helped knock the United States out of contention.

Thousands of Panamanians celebrated long into the night in the capital Panama City as a cacophony of car horns greeted the historic news.

“Today the planets aligned, you must never lose faith,” Varela had said on the Estadio Rommel Fernandez pitch in the capital following the match.

Although not Panama’s national game, football is rapidly catching up with baseball and boxing as the country’s favourite sport.