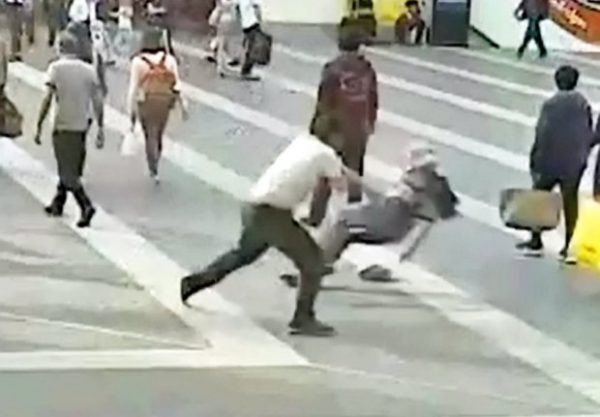 Miguel Steward, a 26-year-old man has been jailed for four weeks for attacking a pensioner in a random street attack while serving a suspended prison sentence.

According to Metro UK, the young man targeted the 68-year-old on the concourse of Birmingham New Street Station on September 2.

There was no motive for the attack that left the victim injured on the ground. Steward was jailed for four weeks after being found guilty of assault by beating at Birmingham Magistrates’ Court yesterday.

He was given an additional four weeks for breaching his suspended sentence. Steward, from Nechells, Birmingham, was filmed launching at the man, sending him sprawling onto the ground.

The court heard the victim sustained injuries and had to be treated by first aiders.

Steward was arrested by British Transport Police officers on September 22 when he was seen at the railway station again.

PC Piotr Gass said: ‘The victim, a retired man in his sixties, was assaulted by Steward for no reason whatsoever.
‘The assault was unprovoked and the victim sustained injuries as a result of the incident.
‘He was very shaken up by what happened and was left feeling unsafe and confused by the incident.
‘Violence will not be tolerated on the railway network and I am pleased that Steward has been convicted and sentenced accordingly.’