While speaking ahead of the meeting of the Southern governors forum holding, in Lagos State, on Monday, the Governor of Ekiti State, has vowed to fight for presidency whether his party likes it or not. 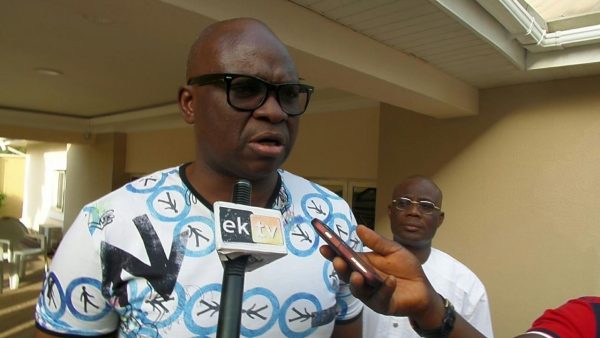 Governor Ayodele Fayose of Ekiti State has declared that he is not going back in his quest to seek to be the next president of Nigeria, this he would do on the platform of the opposition Peoples Democratic Party (PDP).
Fayose said this, in Lagos, on Sunday, ahead of the meeting of the Southern governors forum holding, in Lagos State, on Monday.
Fayose, who said he risked his life to remain the sole opposition voice to the APC-led Federal Government, maintained that the constitution of the country far outweigh that of the party and insisted that he was going ahead to contest the number seat in the land.
Said he, “I am not on my own, I have most Nigerians behind me. Rather, the PDP is on their own.
“I have been well groomed. I am matured and firebrand enough to face challenges of tomorrow. Things don’t happen by accident. When the party (PDP) almost fell apart, how many of them did we see at the time.
“How many of them spoke at the time. If they zoned it to the North, so because I am not a northerner, then I don’t have a right, the Constitution does not allow me to contest? Forget that.”
He continued, “What are you saying? Have you not seen n this country where a zone has two key offices. We know where the Speaker from. There was something there before.
“During Tambuwal speakership, the post was zoned to the southwest but because we lost it, a zone got the two top appointments in the land. Forget about that. It is the Presidency that orders things. When I become President in 2019, I will reorder those things.
“Nothing can stop me from contesting. Even if they pick the party’s chairman from my family: even if they pick my son as party chairman, I will contest.”
On the issue of restructuring, Governor Fayose said that the Igbo remained the most marginalized ethnic group in Nigeria and that itt would only be fair to address the issue of the Igbo in the Nigerian nation.