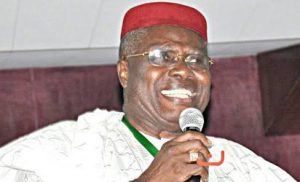 Former Senate President, Adolphus Wabara, on Saturday in Ibadan said the Peoples Democratic Party would win the governorship in Oyo State in 2019.

Wabara, who stated this during the Ward 7 congress of the party at Ona-Ara, said, “I am confident that the PDP will reclaim Oyo State which we lost because of the internal wrangling (the party experienced) in 2011.

“The conduct of party members and leaders in the state during the ward congresses indicated the resolve of the party to win again. It is important to let the people of Oyo State see the PDP as a re-energised party that is strong enough to win elections in 2019.”

At the congress were the former Minister of State for the Federal Capital Territory, Jumoke Akinjide; the Chairman of Oyo State PDP Caretaker Committee, Tunde Akogun; and the Secretary of the committee, Dr. Kola Ademujinmi.

Also at the congress were the Social Democratic Party governorship candidate in the state during the last election, Seyi Makinde; and a former Director of Media of the Labour Party in Oyo State, who is now a member of the PDP caretaker committee in Ona-Ara council area, Taiwo Ibrahim.

Meanwhile, the All Progressives Congress in the state has commended Governor Abiola Ajimobi and Osun State Governor, Rauf Aregbesola, for the Thursday re-opening of the Ladoke Akintola University of Technology.

In a statement by its Public Relations Officer, Olawale Sadare, the APC said it regretted the situation that led to the closure of the institution since last December.

“We, therefore, urge the management, staff, students and other stakeholders to cooperate with the state governments of Oyo and Osun to make LAUTECH the best state-owned university in the country while we count on the governments to prioritise adequate funding of the institution,” Sadare said.