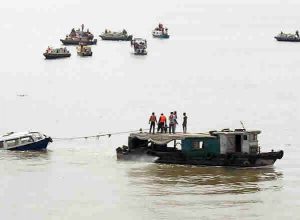 The Zone 2 Police Command, Onikan, Lagos, were left to mourn the death of a Police Sergean, identified as Mary Adesoba, who  lost her life on Tuesday after a boat capsized on the Third Mainland Bridge waterways.

Nineteen other passengers in the boat were, however, rescued by the Marine Police operatives who responded to the emergency.

PUNCH Metro learnt that the boat operator fled the scene of the accident while his conductor had been arrested.

The boat was en route to Ebute Ero from Ikorodu when the incident happened around 10am.

The Lagos State Acting Commissioner of Police, Edgar Imohimi, in a statement on Tuesday, said the boat was in custody of the Marine Police in Keffi, Obalende, while the corpse of the victim had been deposited in a morgue.

He said, “Marine Police of the Lagos State Police Command, in a joint effort with Rapid Response Squad, this morning (Tuesday) rescued 19 passengers from a capsized boat under the Third Mainland Bridge. The boat was conveying 21 passengers.

“An eyewitness called the OC Marine Police who immediately deployed seven boats in the scene. RRS helicopters got the coordinates and mobilised to the scene, leading to the quick rescue of 19 passengers and recovery of the corpse of a woman, whose husband was rescued in the incident.

“The command is using this medium to warn commercial boat operators in the state not to overload their boats to avoid accidents and to always ensure that they provide their passengers with lifejackets.”

The spokesperson for the Zone 2, SP Dolapo Badmos, who identified the deceased woman as a police sergeant with the command, said operatives of the command were deployed in the scene for rescue operation immediately it received a distress call.

She said, “We rescued 19 passengers out of the 20 on board a passenger boat with an inscription, ‘Siliki Marine,’ en route from Ikorodu to Ebute Ero. One Woman Sergeant, Mary Adesoba, with force number, 022814, serving in Zone 2, got drowned. Corpse recovered immediately.

“She was a dutiful officer and we are mourning her.”

The Managing Director, Lagos State Waterways Authority, confirmed the accident in a statement.

The News Agency of Nigeria reports that the statement said 19 passengers in the boat were rescued, while one of the passengers lost her life.

It said the passenger boat, identified as SEALINK, was travelling from Ikorodu to the CMS.

It said the incident occurred at about 9.30am when the boat hit a submerged object.

The statement said the 19 passengers were taken to Ebute Ero Jetty from where they were transferred to a hospital. It added that the agency was investigating the accident.