Home News Feed Police Shoot Movie Actor For Bank Robbery In Broad Daylight | Video
Facebook
Twitter
WhatsApp
An actor has has almost ended up being shot dead while filming a bank robbery scene after police officer mistook him for a real life robber. 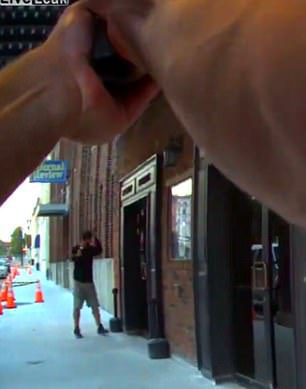 A production crew failed to alert local authorities while filming a bank robbery scene and it almost ended up with one of their actors being shot dead.
According to Metro UK, a police officer in Crawfordsville, Indiana, shot at actor Jeff Duff, who was wearing a balaclava, after 911 calls to say that a robbery was taking place at the Back Step Brewing Company.
Duff was holding a fake gun and backing out of the building. Police ordered him to drop the gun before firing at him. After the shot missed him and went into the building behind him, Duff shouted ‘we’re filming a movie, I ain’t lying to you.’
Fellow actor Phillip Demoret told RTV6 ‘The bullet went by his head. It was very close.  I don’t want to think about it. If it had hit him, we’d be having a whole different conversation. Thank goodness he wasn’t.’
Kodi Swank, co-owner of Montgomery County Production, released a statement: ‘There’s lesson to be learned on both sides of the spectrum from us as a low budget movie company and from the police department on their quick reaction.
‘I’m very grateful that the police department did their job to the best of their ability with an unknown situation.’
The Crawfordsville Police Department said: ‘The subject did not immediately comply with the officer’s commands and raised the gun pointing it at the officer” during the September incident.
‘Officers later determined that the firearm was a movie prop and that the subject was part of a movie being filmed at the time of the incident.
‘Those filming the movie had not notified authorities they would be shooting in area business and on public thoroughfares.’
Watch the video of the incident below: