Deolu
Following the security challenges in the land, the President today met with security chiefs to discuss the way forward. 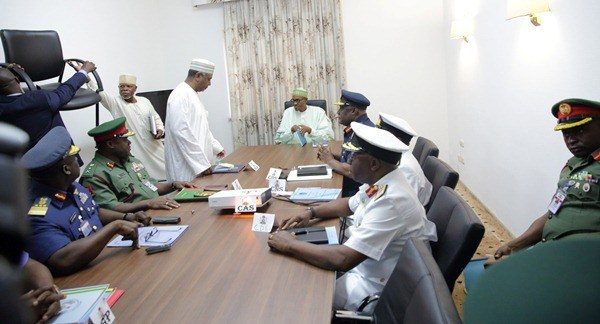 President Muhammadu Buhari on Tuesday met behind closed doors with service chiefs, Minister of Defence, retired Brig. Mansur Dan-Ali and the National Security Adviser (NSA), retired Maj.-Gen. Babagana Monguno.
The News Agency of Nigeria (NAN) reports that the meeting, presided over by President Buhari, was still ongoing as at the time of filing the report.
It is also being attended by the Director General of the State Security Services (SSS), Lawal Daura, the acting Director of the Nigeria Intelligence Agency (NIA), Amb. Arab Yadam, and the representative of the Inspector-General of Police.
NAN reports that the service chiefs at the meeting include Chief of Defence Staff (CDS), Gen. Gabriel Olonisakin; Chief of Army Staff, Major-Gen. Tukur Buratai; Chief of Naval Staff, Rear Admiral Ibok-Ete Ekwe Ibas and the Chief of Air Staff, AVM Sadique Abubakar.