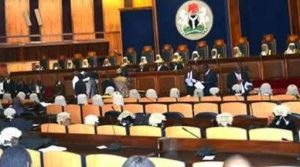 Vanguard newspaper reports that the judges arrived at the Council Chamber, Presidential Villa about 12:38pm while President Buhari was still meeting with the Minister of State for Petroleum, Dr. Ibe Kachikwu.

As at press time, the agenda for the meeting between the Judges and the President was not made public but Aso Rock watchers say it might not be unconnected with the fight against corruption in the country and the role of judges.

President has also accused the judiciary of not giving enough support to his crusade to reduce corruption in the country.