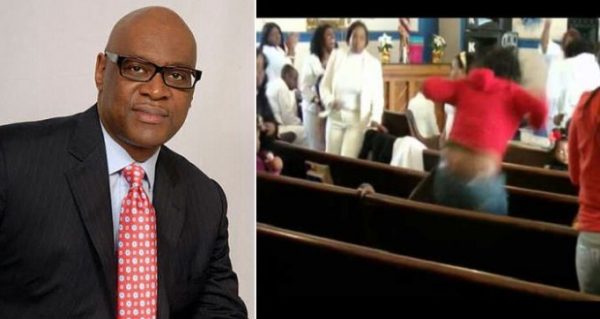 A UK-Based Redeemed Christian Church of God, Jesus House London Parish Pastor, Agu Irukwu is currently under attack by some members of his congregation after he asked them to  give a sacrificial offering.

According to reports, the Pastor started by requesting for members willing to give £2,000 to come forward, after which he requested that those with £1, 000 come forward.

He eventually proceeded to say that anybody giving an offering of less than £250 will not be called forward as he doesn’t want to embarrass them due to the supposedly small amount.

According to Ono Bello, members of his congregation were mortified at his requests as there are personal stories of people struggling financially, with visa applications, to get on the property ladder and gain profitable employment and have not received any support from the church.

The Pastor, who was chosen in 2011 as “Britain’s Most Inspirational Black Person” allegedly pays himself and other senior Pastors in the church a six-figure salary in Pounds.

Share
Facebook
Twitter
WhatsApp
Previous articleFruit seller spotted wearing suit in Yola, discloses his reason for doing so..
Next article“I cannot marry a man who stays on the Mainland” — Twitter user
- Advertisement -Ad ==> Discover how a young Nigerian graduate now makes a consistent 40k per week doing a legitimate online business. You too can start yours now, click here!!!