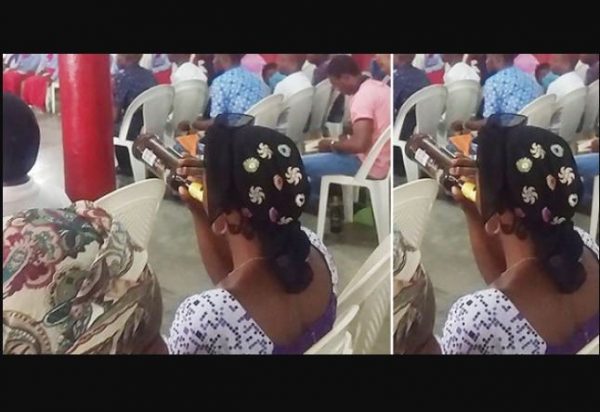 Below is a report by The Nations..

The temple is flanked on one side by what used to be a mosque and the other by a Celestial Church of Christ, which, strangely, wasn’t holding any service this Sunday.

This reporter was however to soon discover during the nearly 10-hour-long service, that the mosque and the Celestial church had to evacuate their locations because of the new “Sheriff” in town.

The first thing that catches your attention as you walk into the church premises, depending on your keenness of sight, would either be the rather heavy use of the colours red and white; or the slaughter slab on the far right corner, though carefully concealed by the gigantic red gate.

Beside the slab this fateful Sunday was a black goat waiting to be slaughtered and served to worshippers.

Makes some sense though. If worshippers have to stay in church up to 10 hours or more, it just might be normal to consider feeding them.

Inside the temple, the love for red is even more pronounced. The floor has a fading red colour, which tells you it had originally been painted with glossy red paint; even the choir and a few members bear a touches of red on their dresses.

Another thing you cannot miss as you walk into the temple is the altar. It is divided into two sections: a very high one, probably the holy of holies, reserved for the Most High, should he come visiting; and then a lower one, possibly where the seer, fondly called Papa, preaches from, whenever he returns from a visit to the Most High, which he claims he does often.

I still communed with the Most High last month. I sit and discuss with Him often. I know his form. Who says we can’t see God?he boasted amidst wild cheers from his followers.

On the higher altar is a massive chair, the type you find in kings’ palaces. That’s probably where the Most High sits when he visits. On the lower altar is a replica of that same seat, possibly for the Papa.

On the far left of the lower altar is a seat like the earlier ones, only smaller in size. This is where the wife of the seer sits during service, albeit only on the invitation of her husband.

Right above the higher altar or holy of holies, is a line-up of some relics, the sort you’re only likely to find in a herbalist’s shrine.

The most conspicuous of these would be an elaborate form of a skull, placed in the middle of two crossed bone-shaped pieces of woods – pretty much like the familiar skull and bones image, used to depict danger and death.

There is also something like a big calabash, placed in the middle, leaving a first-timer wondering if this is a shine or a temple where God is worshipped.

Sunday Nation’s visit coincided with the 6th Anniversary Celebration of the worship centre. It was with great excitement that the seer, Blessed Dike-Oji-Ofo Chukwu announced to the dance-intoxicated congregation that, “Today, we are celebrating our sixth year of moving to this temple.”

This announcement was followed by an excited cheer from the worshippers.

The service, which was said to have begun at 8:30 am, ran for hours unending, with more than half the time spent singing and dancing, and – wait for this – spraying those perceived by the seer to have danced best with money.

Interestingly, the children seemed to be more favoured in the money rain, above the adults. In order to be sure if this was the general mode of worship or just a one-off thing to commemorate the anniversary celebration, our reporter sought the opinion of a female congregant.