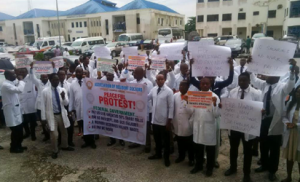 There was confusion at the Jos University Teaching Hospital on Monday, as resident doctors in the state protested against draconian policies of management.

Their complain the sacking of doctors in the institution; planned implementation of no work, no pay policy, contrary to the memorandum of the terms of settlement between the National Association of Resident Doctors and the Federal Government; and exclusion of the names of some staff from the nominal roll for October.

As early as 8:00am, the doctors had besieged the hospital premises chanting solidarity songs and carried placards with various inscription, including “FG, call the CMD of JUTH to order”; and “FG, Save Jos University Teaching Hospital.”

It was reported that the Abuja Division of NICN, had on August 28, ordered the JUTH CMD, Prof. Edmund Banwat, to desist from sacking resident doctors in the institution.

But when contacted, Banwat told our correspondent that the protest was illegal since the resident doctors have approached the court for a review of the order.
He said, “When a matter is in court, it is the court that has the capacity to enforce judgement. Yes, the resident doctors went to court to challenge tenure of residency training.

The protest is illegal, it is not for them to go and protest, they have approached the court for them to take a look at the order.

“Why are they protesting when they are already in court? The court has the capacity to enforce its own order on whatever ruling that had been given. We are therefore surprised that they are protesting and carrying placards. Their lawyer should advise them better.”