Home News Feed Smugglers Disguised As Mourners Intercepted By Customs
Facebook
Twitter
WhatsApp
Some smugglers operating at the Nigerian borders disguised themselves as mourners to beat the security system but were fortunately apprehended. 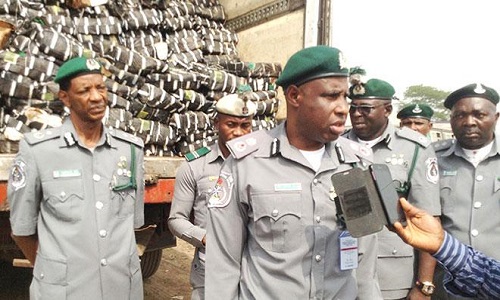 The Seme Area Command of the Nigeria Customs Service has announced the arrest of two men, Taofiq Oyewale and Segun Oyinola,  who allegedly disguised a smuggled L450 Jeep  with posters of a dead  person as though they were on a burial procession.
While announcing the arrest in a statement on Tuesday, the Public Relations Officer of the command, Taupyen Selchang, said that this was a new strategy adopted by the smugglers to evade the operatives of the NCS.
Selchang said that smugglers also used waste disposal truck as tool of disguise, adding that men of the command examined a waste disposal truck and found 534 pieces of used tyres.
He said the two suspects arrested in connection with the crime were undergoing interrogation and prosecution by the legal department of the service.
The statement quoted the Area Controller, Seme Command, NCS, Mohammed Aliyu, as saying that no amount of antics devised by smugglers would go undetected by the officers.
He added that implementing the policy of the Federal Government on the ban of new and fairly used vehicles through the land border was a task that must be done by officers of the command.
He reiterated that as an institution that enforced government’s policies, the compliance level of the ban on importation of new and fairly used vehicles through the land border that commenced on January 1 was  still in force and would  be sustained.
Aliyu warned  smugglers who would  not desist from using the Seme route would  continue to count their losses behind bars when arrested and prosecuted to serve as deterrent to others.
The Customs CAC also re-emphasised the need to beef up security along the border considering the security threat of illegal importation of arms through the nation’s sea ports.
He stated that the border command was strategising and deploying high level of intelligence and professional competence, fortifying the entire land border in order to foil all attempts of arm smuggling and other trans-border crimes into the country.