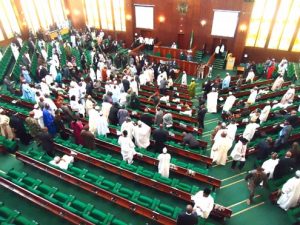 Two members of the Sokoto State House of Assembly identified as Alhaji Sani Yakubu and Alhaji Malami Galadanchi have both been suspended.

This followed the report by the special committee that investigated allegations of unethical conduct by some members of the Assembly during the recent impeachment of the Deputy House Leader, Alhaji Kabiru Ibrahim.

The Committee Chairman, Alhaji Habibu Modachi, moved that the Assembly consider the findings and recommendations of the committee.

According to the report of the committee, Yakubu and Galadanchi pleaded guilty to all the charges levelled against them.

“That, the two defendants, had committed unethical behavior in the legislative chamber on August 15 contrary to the provisions of the House standing rules and the legislative Houses act..”

Based on these findings, the committee according to Honourable Habibu Modachi, come-up with the following recommendations,”that, Honourable Sani Yakubu be suspended for the period of forty legislative days and also submit an apology letter to the Assembly for his action.

“That, Honourable Malami Galadanchi be suspended for the period of thirty legislative days and also to forward and apology letter to the Assembly for his conduct,”he added.

The Speaker Alhaji Salihu Maidaji said that, the recommendations of the committee are considered and approved accordingly, as the members accepted the request in a majority vote.