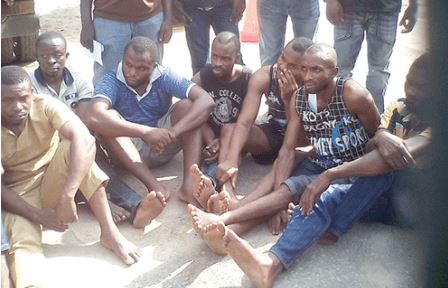 Luck has ran out on three serving soldiers, a dismissed air force officer, a final year Accounting student and seven other people arrested by the police for allegedly stealing government solar panels and telecommunication provider valued at N100 million, according to NewTelegraph.
Before their arrest, the suspects have been on their wanted list for long, before their eventual arrest at the Epe area of Lagos State. The suspects are Samuel Ani (30), Michael Omoregbe (30), Efosa Philip (27), Ifedayo Odufoye (35), dismissed air force officer, Chibize Nnamani (34), Festus Maduka (26), John Nwokeoma (31), Michael Chukwudike and Chibuzor Chukwu (23).

The three soldiers, whose identities police refused to declare, had already been handed over to 9th Bridge of the Nigerian Army for proper investigation.

The state Commissioner of Police, Imohimi Edgal, said that the suspects belonged to a group which specialised in vandalising government and private property in order to sell them.

According to Edgal, the suspects have vandalised some solar panels at Epe, Sangotedo, Elerngbe and Badagry area of the state.

He said: “On September 5, about 2a.m., the seven suspects came with a truck marked LND 61 XQ and invaded Okemagba Senior Secondary School, Epe with three soldiers.

“They stole 71 solar panels. They also forced the door of the container, where the inverter batteries and accessories were kept and went away with them.”

Edgal said that some of the buyers were traced to Delta, Anambra and Imo states. One of the buyers, Maduka, who was picked up in a hotel, confessed to have received solar panels and inverter batteries from the suspects.

The former air force officer, Odufaye, said that he was dismissed in Maiduguri, where they were fighting Boko Haram members.

Odufaye explained that he was asked to arrest someone, but refused. He was court martialled and dismissed.