Farouq Marshal, the Son of Fuji Music legend, K1 is on twitter calling out a girl who called him ‘lame’ for refusing to do drugs.

He took to his social media page to call out an unknown lady who called him lame because he refused to take a pill she offered him.

He wrote: ‘Shorty Really Just Called Me Lame For Turning Down Whatever Pill That Was. What Kinda Lowlife Sh!t Y’all Be On These Days?’. 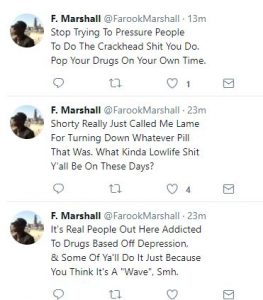