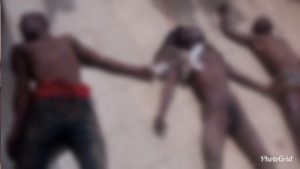 Three suspected armed robbers in Ondo State were lynched to death on Monday while attempting to steal motorcycle at Oke Aro area of Akure, the Ondo State capital.

The suspected thieves were said to have been beaten to death by angry mob who were attracted by the call for help of the motorcyclist.

The Public Relations Officer of the Police Command,  Femi Joseph said the police were alerted to the incident and immediately rushed to the place.

However, he explained that the three suspected robbers were already on the blink of death when the police rescued them from the angry mob, who had taken law into their hands by pouncing on them mercilessly.

The three suspected thieves according to the PPRO gave up the ghost on their way to the hospital for treatment.

Adelegan who condemned the act of jungle Justice which led to the death of the suspected thieves, said investigation has begun to get the perpetrators arrested.