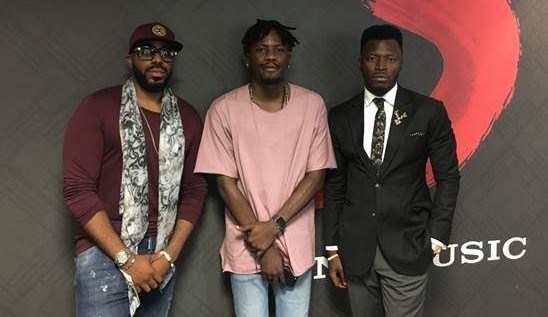 In October 2016, it was all joy and excitement when Sony Music Africa announced Rapper Ycee as the newest member of the Sony Music Africa family. 365 days later, inking the Sony Music deal appears to be one the rappers biggest regrets as he is for the second time in three months publicly calling out the organization and it’s executive for allegedly milking out his proceeds and exploiting his career.

This past August Ycee in a series of tweet accused Michael Ugwu the Regional Executive of Sony Music and FreeMe Digital– one of Nigeria’s foremost digital music distribution network also owned by Ugwu- of reaping musicians off in the guise of wanting to help. The stir eventually settled but apparently only on the surface as the rapper has gone on another twitter blow out this morning encouraging young artistes to be wary of major labels; stressing that SONY tried to ruin his career but he survived only because he had a backup plan.

MAJOR LABELS approaching you and claiming to help you grow? Be very very careful.

They tried to ruin my career but we had a PLAN B.

I’ll speak as much as I can to prevent others from being a VICTIM.

Too many artistes stay silent and make others suffer the same cause.

So far, Sony Music hasn’t made any official statements regarding any of the rappers claim and a recent press release from Sony Music suggested that the label considers Ycee a priority. Michael Ugwu also cited during an interview with Vibe that Sony Music West Africa is still strongly behind the rapper.

‘The nature of the major label business is one of patience as pulling off campaigns that involve multiple territories is never an easy task. We at Sony Music West Africa have always believed in the talent that is Ycee and we hope for more wins for this talented young artiste as he learns the ropes of the global music business’ Ugwu said.

Calls made to Ycee and his management at have not been answered at press time.