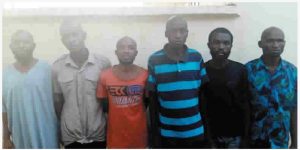 A gang of thieves led by two men identified as Ochuko Awusa and Gabriel Ibia have  been terrorising and robbing motorists at gunpoint in Kaduna State and its environs.

According to the Inspector General of Police Special Intelligence Response Team, which was saddled with tracking down the gang, the suspects dispossessed motorists of their vehicles, which they sold off in Jos, Plateau State.

IRT’s investigation revealed that the gang robbed their victims with a locally-made gun.

A member of the gang, said to be the contact man, Jethro Jammal, connected the gang to the receiver of their stolen goods in Jos.

After an investigation that culminated in a raid, all the members of the gang were arrested by operatives of the IRT.

Thirty-six-year-old Awusa, is a native of Delta State and graduate of Accountancy from the Federal Polytechnic, Bida, Niger State.

In his statement, Awusa went into the details of his journey into crime.

According to him, he graduated from polytechnic in 2007 and went to work for a popular eatery in Kaduna State where he was paid N52,000 monthly as store keeper.

He said, “I worked there for one year and left when I got another job at an advertising company in Abuja as a marketer.

“I earned N175,000 monthly and I worked with the company for two years and six months before I was sacked in 2013.

“I could not secure another good job and decided to go into crime four years after in February 2017.

“I started with one of my friends known as Gabriel, who also lost his job and our first operation was on the Nnamdi Azikiwe Expressway, Kaduna State, where we collected a Honda Pilot SUV from its owner after he ran into a ditch during a downpour at the Federal Cooperative College end of the expressway.”

According to Awusa, when he and his friend saw the owner of the vehicle making frantic efforts to pull the vehicle out of the ditch, they approached and offered to help him.

But once they gained access into the vehicle, they zoomed off.

He said, “I drove the vehicle to Jos and I called one of my friends who resided there, Jammal and told him about a vehicle I had for sale.

Awusa said in their second operation in March 2017, they robbed a woman in Kaduna State along the Tafawa Balewa Way while she was withdrawing money from an ATM.

According to him, they waited for her from a distance and pounced on her as she attempted to enter her car.

They robbed her of her money and zoomed off in her car.

Awusa said, “The car was a Toyota Corolla and we didn’t sell it because Balla who bought the Honda Pilot SUV cheated us too much.

“We kept the Corolla and drove it around for a few hours because we knew that there would be no police checking point on the road.

“We were also looking for money to change the plate number and procure new vehicle papers. We did not do any other job until August 2017, when Jethro called me and said he was broke.

“He said he needed money and that he had a locally-made gun and two boys – Gerald Naboth and Simon Brown – who could join our operation.”

Saturday PUNCH learnt that on their third operation, the gang robbed a drunk man of his Peugeot 406.

Awusa said they found the man drunk and vomiting. They then took his wallet which had N6,000 in it and sped off in his car.

The car was taken to Abuja where it was sold to a man who had reputation of buying stolen cars.

“He said that he did not buy stolen cars but that he would link me to someone who could buy the stolen cars. I did not know that the person he was linking me to was a policeman. I was arrested eventually and then led the police in arresting five members of my gang.

“This operation was supposed to be my last operation because I had decided to relocate to Delta State, where I had secured a job as a teacher in a secondary school. I have decided to be a changed person.”

Ibia on the other hand, is a 27-year-old Benue State indigene, who claimed to have become a criminal “by accident.”

He said in his statement that he was working at a bakery and that he met Awusa at a bakers’ conference in Kaduna.

He said, “We became friends and discussed how much it would cost to start a bakery. Later, there was a time we attended a party at the Cooperative College, Kaduna. We saw a man outside, who had a problem with his car and was helpless, his vehicle was inside a gutter. We decided to steal the man’s vehicle.

“That was why I said I came into crime unknowingly. I did not follow them to the last operation, but the vehicle we got from the second operation was with me. We had planned to use it for a taxi around Kaduna and we were looking for money to change the papers. But I abandoned the vehicle at a checkpoint at Marabarido area of Kaduna and ran away when I saw policemen.

“After I was arrested, I took policemen, who arrested me to the place where I abandoned the vehicle and we couldn’t find it. I regret getting myself into crime. I have even got another job in a bakery in Kachia Local Government. That was where I was arrested.”

He said Jethro got him involved in the crime after he complained to him that his wife was pregnant and was about putting to bed.

He said he needed money to take care of his unborn child.

One of the members of the gang, a food vendor, Bala Mamah, a 37-year-old Plateau resident, said he got involved through temptation.