Home Entertainment Video: “How does it feel to be made fun of?” actress Liz...
Facebook
Twitter
WhatsApp 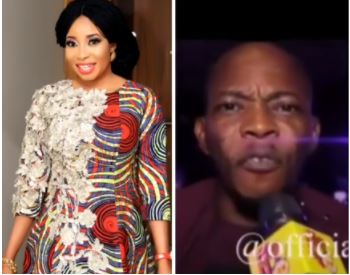 Two days ago, HipTV posted a video of an interview conducted with comedian Koffi where he was asked to speak on the recent breakup of PSquare’s Paul and Peter Okoye. Koffi in the interview said he doesn’t give a “Frog” about the singers and that they should get into their house and solve their issues as he has his own. While some people believed Koffi used the word “Frog instead of “F**k” out of courtesy since it was an interview that would be broadcasted, others thought he had made a grammatical blunder and mocked him online.

Actress Liz Anjorin shared the video of the interview this morning and drew Koffi’s attention to the time he shared a video in which she also made some grammatical errors and was the butt of the internet. In the video which went viral in February this year, Liz attempted to take a photo with her dogs but noticed her smaller dog wanted all the attention and was barking at the bigger dog. Liz then said “Pretty stop it, stop jealous!”. Many people mocked her for her poor use of English. Read here.

According to Liz, Koffi who is supposed to be her friend, reposted the video on his social media handle for his followers to make fun of her. She apparently did not find it funny and waited for a day she would also take a jab at him. Well, his new “I don’t give a frog” interview has given her that opportunity. See what she wrote as well as both interviews below. But any sensible person should know the use of ‘frog was deliberate as he obviously avoiding using vulgar language…

“U reposted “STOP JEALOUS” video to make fun of me despite our relationship, despite the fact dat pple misquoted me.. How do u feel being misquoted now?? I’m not posting dis to make fun of u in return, but to remind u dat nobody is above mistake or Cyberbullying… Guys don’t ever make fun of ur neighbours. Note; Neighbours are not only d pple living around u or pple living under the same roof with u, but pple that u’ve met before, pple u are on the same line of career or business. Don’t make jest of pple u don’t know, since u can’t predict the date of ur own death.. Don’t laugh at drowning pple if u can’t throw rope to assist dem, close ur eyes and leave. U will be surprise that I celebrated ur birthday and prayed for u, exact 30days u mocked me.  The ARIES spirit in me didn’t permit me to forget things easily. I’ve once said; Social media is like death, we shall all taste the unfair and negative side of it!!‎
The lady that sent me your #frogoff video fainted the day she saw your post about #stopjealous and when she woke up, the first thing she said was; Aunty, someone has hacked Koffi’s account, She almost ran mad out of shock, she’s the one dat held the same dog “Pretty” to ur musical video shoot, she know how much I personally like u and boost about u everywhere.. My girl said: the day i met uncle koffi i thought u guys care about eachother’s career, why did he get involved in this ridiculous memes?? I was just laughing bcos dat video makes me see worst from pple I thought they liked me.
There is another close Aunty that wrote: Lizzy, congratulations on ur new house and she used the same video after 6months we moved in, issa #stopjealouse video she used to  congratulate me?
Another blogger did memes with Mr okon on the same video, it was during my recent event I got to know the owner of the blog.. He’s my god son, i realize evil don’t live underground, it lives in human’s heart.. Alhamdulilai!! Their memes makes me stronger and well determine.  Moral of lesson; it’s here on earth we will all reap what we sow and People who live in glass houses shouldn’t throw stones. be guided!! use urself to build not to destroy‎ #WhiteDragon”