Home News Feed Vulture ‘Delivers’ Letter To Monarch To Quit His Throne
Facebook
Twitter
WhatsApp
In what will come across as a really stunning development, a monarch has allegedly been delivered a letter by a vulture, ordering him to vacate his throne. 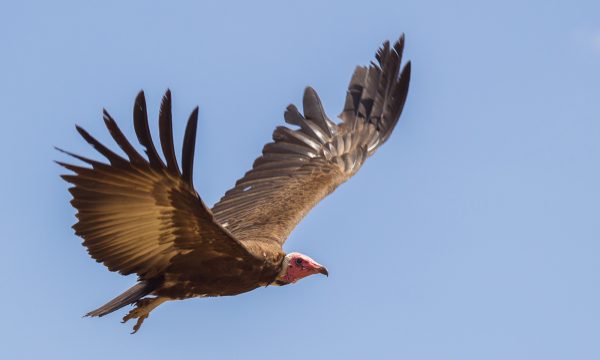 The many natives of the Iba Oku, Uyo local government area of Akwa Ibom state are yet to come to terms with how a vulture allegedly delivered a letter to their village head, Eteidung Gabriel Mbeka asking him to quite his throne.
According to The Nation, since the strange incident occurred, palpable tension has enveloped the sleepy community even as the embattled monarch has cried out for help alleging that his throne and his life are being threatened by ‘sinister forces’.
Speaking to the Nation in his palace, the monarch accused the Clan Head of Oku, Etebom Enefiok Effiong Okpon, of alleged sinister plot to oust him “because he wants to turn my domain into his vassal province”.
“Since I was given the staff of office in 2012, as the Village Head of Iba Oku, I have been having a running battle with my Clan Head, Etebom Okpon, who insisted he must also control my domain and collect revenues.
“When I could not yield to his request, he resorted to using traditional invocations to eliminate me. They sent vulture to deliver a letter, asking me to quit the throne. I was scared and had to escape from my palace for several months.
“Since that period, I have been totally deprived of my powers to function effectively as the traditional ruler of my community.
The Clan Head denied me the powers to hold court with my people by sealing off the Village Council Hall, forcing me to attend to my people in the primary school and my palace.
“Hoodlums also invaded my palace and seized my royal regalia and other paraphernalia of office; just make me ordinary as a traditional ruler.
“When all these actions failed, he started sending threat messages that I would be eliminated if I fail to cooperate with him to sell government’s land and share the proceeds with him.
“Recently, he sent one of his Personal Assistant (PA) to come to my area and enquire concerning my personal details as well as my daily routines. But he did not know that one of those he enquired from is my loyal subject.

“I reported the case to the Police and later charged it to Court, but up till now, it is regrettable that matters concerning my life cannot be allowed to go to Court for redress because of interventions by politicians for their personal interests”, he lamented.
It was gathered that the Etteidung Mbeke, was heavily hounded with trump up charges of embezzling N20million proceeds from the community land and other funds, but the monarch denied the allegation and took the matter before the Uyo Magistrate Court 11.
The case with charge number: MU7152017, according to the monarch was first heard at the Uyo Magistrate Court 11, but the Court declined jurisdiction and referred it the Directorate of Public Prosecution (DPP) for the matter to be reassign to the High Court.
The monarch prayers include Court order restraining the accused from invading his community with warriors to dethrone him, threats to his life and plot to take over his domain and resources.
“Up till now, the case is still pending with the DPP because of interests from the politicians including the member representing the Uyo Federal Constituency, Hon. Mark Enyong and that of the House of Assembly for Uyo, Hon. Monday Eyo”.
“I want justice in my case; let the matter be taken to the High Court so that all these issues will be addressed. The politicians should leave the case alone because it is a traditional matter”, he said.
According to him, the case was to be heard in the High Court, on October 26, but expressed worry that with all the antics displayed by the DPP, the matter may be suppressed continually”.
“I am the only surviving Village Head still remaining on the throne in Afaha Oku Clan. The Clan Head has made it a point of duty to stampede others who could not cooperate with him”, he lamented.
“For instance, he (the Clan Head), has forced out other certified Village Heads in my Clan including the Village Head of Nnung Ebie Enang Idoro, Nnung Uyo Idoro, Nduetong Oku and Afaha Oku”, he said, adding that “in some villages that he can’t control, he made sure there is a parallel government in the place.
When contacted the Divisional Police Officer (DPO) in-charge of the case, Mr. G. Udofia, saying the matter has lingered for several months, but express worry over the refusal of the contending parties to resolve it amicably.
“The Federal House member for Uyo, Hon. Mike Enyong called me to expressed dissatisfaction over the handling of the matter and since then, I have not heard from him again”, he said.