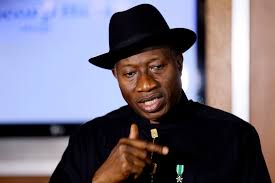 Mr. Jonathan had last Thursday said that the government of his successor is full of lies and propaganda and has achieved nothing since coming on board.
Mr. Jonathan said this in Abuja when one of the national chairmanship aspirants of the opposition Peoples Democratic Party, Tunde Adeniran, and members of his campaign team visited him.

However, Mr. Buhari on Monday insisted that his government has performed well since coming into office in 2015.
He stated this at the opening of a two-day Nigeria Governors’ Forum, NGF, Conference, NGF, for media handlers of state governors in Abuja on Monday.
He was represented at the occasion by the Minister of Information and Culture, Lai Mohammed.

“For our administration, our achievements are there for all to see. We are delivering in the broad areas that formed the plank of our policies: Security, fight against corruption and the economy, which includes the massive provision of infrastructure, ease of doing business and agriculture, just to mention a few,” he said.

Providing facts and figures, the president listed his administration’s achievements in ending subsidy and “yet ensuring the availability of petroleum products; in raising power generation, transmission and distribution, in the massive provision of infrastructure; in tackling insecurity and making a success of the agriculture revolution.”

“Those who accused this administration of ‘propaganda and lies’ in the fuel supply sector, for example, did not tell Nigerians that whereas they paid between 800 billion and 1.3 trillion Naira as’ subsidy’ yearly in their time, without making the products available even at regulated prices, this administration is not paying any subsidy, yet all products are currently available at competitive prices and fuel queues are now history.

“Those who accused this government of ‘propaganda and lies’ also said we have not achieved anything in the power sector. Comment is free, facts are sacred, as they say. When this Administration assumed office on 29 May 2015, available power on the grid totalled 2,690MW, transmission capacity was around 5,000MW and distribution capacity was 4,000MW.

“Because of the increased spending in these areas, the massive debts owed to contractors are being settled so they can recall workers who were laid off and re-open closed work sites. As a matter of fact, during the implementation of the 2016 budget, we paid 103 construction companies executing 192 projects, and they, in turn, employed 17,749 people directly and 52,000 people indirectly in works.

“So far this year, 47.169 billion Naira has been paid to 62 contractors working on 149 projects to continue work on roads and bridges and keep people at work. Similar payments are being made to supervising consultants and to contractors in Housing and Power Sectors of the Ministry,” he said.
The president also highlighted the achievements that have been recorded by his administration in the area of the economy, wondering whether it is ‘propaganda and lies’ that headline

“Inflation has now fallen for the eighth consecutive month; that foreign exchange reserves are up to $32 billion, from $24 billion a year ago: that oil production is at nearly 2 million barrels per day and that Home-grown School Feeding Programme now being implemented in 17 States is benefiting more than 3 million public primary school children and more than 30,000 cooks across 20,000 schools”.

He said close to 200,000 youth are now benefiting from the N-Power Programme, which recruits unemployed graduates to work as teachers, agricultural extension workers, and health extension workers; that the Government Enterprise & Empowerment Programme (GEEP), which provides micro-credit to farmers, traders, and artisans, now has in excess of 1 million beneficiaries, with women accounting for 56 per cent of that number, and that at about $1.8 billion, the capital inflows in the second quarter of 2017 were almost double the $908 million in the first quarter.

”If our achievements are based on ‘propaganda and lies’, as they claim, why is our agricultural revolution achieving so much success: We have commissioned the 120,000 MT per annum WACOT Rice Mill in Argungu, Kebbi State.

We have commissioned the 60,000 MT per annum Edo State Fertilizer Company Limited. What about the commissioning of OLAM’s 750,000 MT per annum Integrated Poultry Facility in Kaduna State? Do you know that 15 moribund Fertilizer Blending Plants have now been revived and in operation across Nigeria, under the Presidential Fertilizer Initiative, creating 50,000 direct jobs and 70,000 indirect jobs?” the President asked.

He said when his administration assumed office in 2015, Boko Haram was active in at least 10 states, adding that the terror group could then “stroll into Abuja at a time and target of their own choosing to cause maximum havoc, in addition to‎ holding territories and collecting taxes”.

The same vigour is being used to address the herdsmen-farmers’ clash, kidnapping for ransom and other crimes,” the president said.