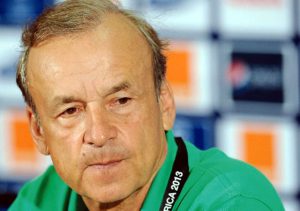 Super Eagles technical adviser, Gernot Rohr has  admitted that  he is worried about the young players of the Chipopolos of Zambia ahead of the  Group B Russia 2018 World Cup qualifier in Uyo on Saturday.

Chipolopolo manager Wedson Nyirenda boasts three young forwards in his 23-man squad for the encounter, which they must win to stand a realistic chance of making it to Russia.

The Eagles are in a commanding place to qualify for their sixth World Cup after amassing 10 points from four games to sit atop Group B. Chipolopolo are second in the table on seven points while African champions Cameroon are third on the log with three points. Algeria are last in the group on one point.

And Nyirenda, who is attempting to make history by becoming the first coach to steer the East African country to their first World Cup qualification, arrived in Uyo on Thursday with Red Bull Salzburg striker Patson Daka (18), Spartak Moscow forward Fashion Sakala (20) and Orlando Pirates attacker Justin Shonga (20) ahead of Saturday’s clash.

Although they are unproven talents, Rohr believes the youngsters could spring a surprise against the Eagles, who need a win to land in Russia.

“Zambia has a team with young players, who are quick strikers,” the German coach, who promised that his team would win the clash, told reporters in Uyo on Thursday.

However, Rohr, who said he had analysed the opponents, said he would change his tactics when the need arises during the game.

The former Burkina Faso manager said, “The style of play in the game against Cameroon is a reference point for us.

“We are trying to adopt the same style to some degree for this game, but we know it will be much difficult against Chipolopolo.

“When we played in Zambia (Nigeria won 2-1), they watched us and know us too. So, we need to have creativity to change the way we play to be able to surprise them.”