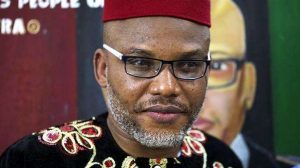 The ​f​amily of Nnamdi Kanu,​ ​has ​dismissed claims by the Abia Commissioner of Police, Anthony Ogbizi, that police recovered lethal weapons when they raided the family’s compound at Afara Ukwu together with the Army on October 8.

Emmanuel Kanu​, the family’s spokesperson, told journalists via telephone that if ​any weapon was found​ within the premises, it must have been planted by security operatives.

He accused Mr. Ogbizi of fabricating the story to justify ​the​ ​”illegal ​raid” and also appear as though he was doing his job, The Nation newspaper reports

“This new CP was the same man who came to our house two days after the September 14 invasion with two Hilux vans and his Prado SUV and pulled down the car porch and destroyed the vehicles parked outside.

“This same CP hurriedly after the invasion on the October 8, issued a press release telling the whole world that they discovered bombs in my house. The army on the other hand, denied that there was no invasion and that they never went to my house, what a contradiction.

“A house that there has not been any person inside except our guard who we asked to look after the house, all of a sudden they invaded the house and came back to say they found a dane gun, double barrel gun and petrol bomb. Who manufactured them? Who kept them there? That is the question to ask.”

Mr. Kanu narrated how police officers arrived and searched the entire house and also took off the CCTV so as to “concoct whatever that they would present to the public to label the family bad.”

“The policemen came to our house and ransacked the entire compound including my mum and my father’s rooms, removing my mum’s boxes, our TV and generator sets, bags of rice and many personal belongings without knowing that we had a CCTV recording their activities in the house. But when they got clue about the CCTV and in order to concoct whatever that they would present to the public to label our family bad, they came back and removed the CCTV from where they were hung.”

“I am telling the international community to prevail on this people. What the Police and other security agencies are doing in my house, my community, in my state and the entire Biafran Land is evil. It is clear that out of desperation, they are trying to cover their tracks and they have failed.”

Mr. Kanu also spoke on the labelling of his brother’s separatist organisation, IPOB, as a terrorist organisation by the Nigerian government.‎ The tagging occurred after violence between members of the organisation and soldiers in September leading to death of a police officer and burning of a police station. Dozens of IPOB members are currently being prosecuted.

‎“Nobody can tag IPOB a terrorist organisation,” he said during the interview as published by The Nation newspaper.

“We don’t carry arms and arms never solved any dispute. They should engage IPOB leadership genuinely. We are not violent. We don’t give life and we can’t take one. They have rubbished the name of the country called Nigeria, that’s why we are called Biafrans.

“They invaded the house and took away the CCTV now they said that they discovered petrol bomb and the rest of it, when we had only one person in the house. How possible is that? Who planted them?”

He accused the Abia State commissioner of police of witch-hunt.

“if he was serving in his Cross River State, he wouldn’t have raided the palace of the Obong of Calabar under any guise the way he raids my father’s palace and boasted he would raid it again, this can only happen in Igbo land.”

Mr. Kanu also alleged that the former commissioner of police in Abia, Adeleye Oyebade, was removed was because “he knew that IPOB has been non-violent in their activities and he stood on the side of truth” and as such “refused to be compromised.”