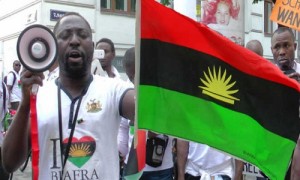 The Movement for the Actualisation of the Sovereign State of Biafra ( MASSOB ) has called on the Federal Government to declare an emergency on the roads in the South-East and South-South regions of the country.

MASSOB said rather than make empty promises on the construction of a second Niger Bridge, the Federal Government should concentrate on the reconstruction of the bad roads in the two regions.

National Director of Information of the pro-Biafran group, Mr. Sunday Okereafor, expressed surprise that while the roads in the South-East and South-South had become death traps, the Federal Government was promising to construct a second Niger Bridge.

Describing as an empty promise the recent pledge by Vice-President Yemi Osinbajo to deliver a second Niger Bridge to the people of the South-East, Okereafor, who spoke with SUNDAY PUNCH on Saturday, said such promise was a mere election campaign aimed at getting Ndigbo to vote for the All Progressives Congress in 2019.

He also urged the people of the South-East not to be deceived by such a promise, recalling that past administrations gave a similar assurance but reneged on it.

He said, “The promise is an empty one. What of our roads? Even where they produce oil, the roads there are still bad. From Rivers State to Enugu, from Enugu to Onitsha, the roads are all death traps.

“On the second Niger Bridge, former President Olusegun Obasanjo awarded the contract, ex-President (Umaru) Yar’Adua talked about it; former President Jonathan also promised to do it and now, President (Muhammadu) Buhari is promising that his government will construct it.

“We are telling Ndigbo not to believe them (FG). It (promise) is only aimed at getting their votes in 2019. The second Niger Bridge cannot work. They should repair the bad roads first.”

Osinbajo had, during the governorship campaign of the APC in Onitsha, assured the people of Anambra State that the Federal Government would construct the second Niger Bridge.

Okereafor also expressed doubt over the President’s directive that former Biafran policemen should be paid their entitlements, adding that affected persons should not take such a directive seriously.