Home News Feed Young Indian Girls Brutally Whipped To Cure Them From This
Facebook
Twitter
WhatsApp
Photos of some young India girls have been seen being brutally whipped in ritual to cure them of evil spirits.
Shocking footage has captured Indian women being whipped during a bizarre ritual to free them of ‘evil spirits’, according to Dailymail.
The ceremony which takes place at the ancient Achappan Temple in Trichy, south India every year sees about 2,000 women queue for five hours to be lashed at the ancient Achappan Temple.
When their turn comes, they kneel on the ground to be ferociously flogged by a priest. Many wince and writhe in pain as their family members watch on, hoping they will be cured.
One school girl Vishakha, who was made to sit in the queue by her parents, said: ‘My parents think I’m possessed because I show no interest in my studies.
‘Now my friends will laugh at me when they see the whip marks I’ll get after attending a festival to cure mental disorders,’ cried the young girl.
Other teenage girls were brought by their parents for either not yet attaining puberty or having irregular periods.
A priest insisted the whipping was not a crime, adding: “It is a belief of devotees and the practice is an ancient tradition. We cannot alter.'”
Some elderly women agree with the priest and believe the whipping will cure them.
One 60-year-old said: “A lash here cures all ills, physical or mental. I have been receiving lashes at the temple for past decade and I have been cured of my illness. I have immense faith in the lashing.” 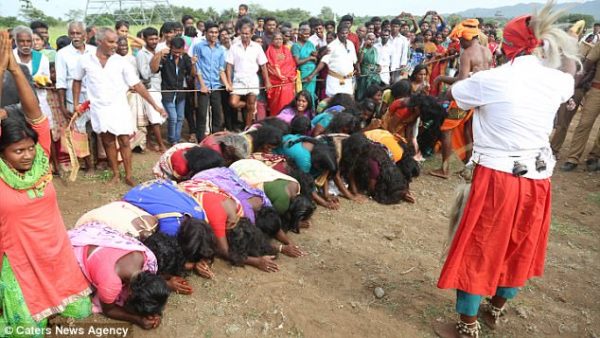 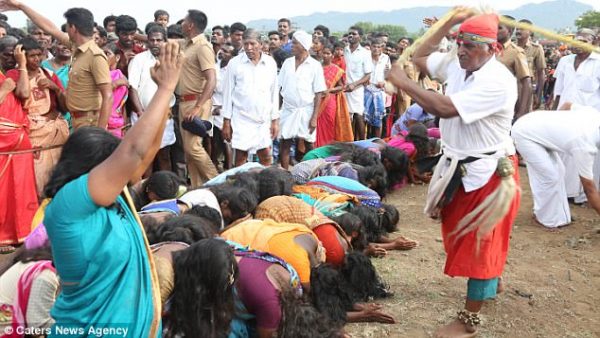 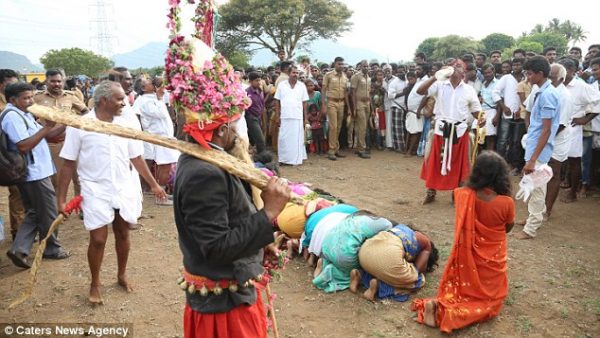