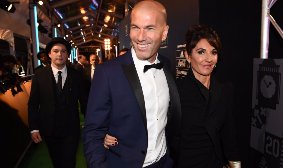 Real Madrid boss Zinedine Zidane was named the 2017 Best FIFA Men’s Coach of the Year at a ceremony at the London Palladium theatre on Monday.

Former France star Zidane was the first coach to oversee a successful defence of the European Cup in the Champions League era.