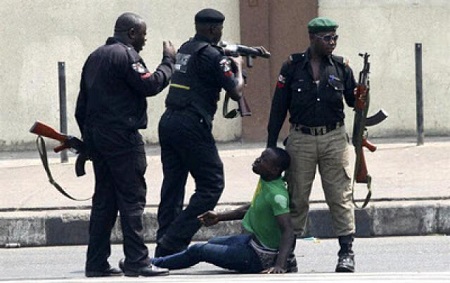 A 15-year-old boy, who allegedly cut his neighbour with an axe on the neck during a fight, was on Wednesday brought before an Ikeja Chief Magistrates’ Court, NAN reports.
The accused, an apprentice, who resides at Abimbola Street, Moricas, Agege, a suburb of Lagos, is being tried for assault.
A fight had broken out between the accused and his neighbour’s son over who should sweep the compound, Police Prosecutor Raphael Donny told the court.
He said the offence was committed on Oct. 26 at the tenement building located at Abimbola Street.
“The accused took a small axe and cut the complainant on the neck.
“The complainant was rushed to the hospital by other neighbours while some policemen on patrol also came to the scene,” he said.
The offence contravened Section 173 of the Criminal Law of Lagos State, 2015.
Assault occasioning harm carries a penalty of three years imprisonment.
The accused, however, pleaded not guilty to the charge.
Chief Magistrate Folakemi Davies-Abegunde, in her ruling, granted the accused bail in the sum of N200,000 with two sureties in like sum.
She ordered the teenager to be remanded in Juvenile Correctional Centre, Adigbe, Abeokuta, Ogun.
The case has been adjourned until Dec. 4 for mention.