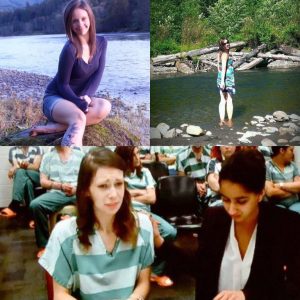 A 21-year-old prostitute has been accused of shooting a man in the head twice because he was performing oral sex on her the wrong way and she did not know how to tell him.

The 36-year-old man miraculously survived after the attack in his home in Everett, Washington, on October 24. Police have since arrested Marissa Wallen, who they say had been at his house several times.

She wept as she appeared in court to face charges on Thursday. A probable cause document filed by police for the woman’s arrest said she was an ’emotionless, cold and calculating’ escort.

‘In the end she said that she shot (the victim) two times in the head because he was preforming oral sex wrong and she did not know how to tell him that,’ the document reads.

After allegedly shooting him, Wallen is said to have stolen the man’s wallet and used his credit cards. Police say she spent $12,000 of his money before she was caught.

The man was found awake but unresponsive in his home on October 24 after the shooting. He remains in hospital. Police found him slumped against the wall after going to the house when his boss reported he hadn’t signed on for his at-home job.

According to police, Wallen confessed to the crime once in custody. She is being held on charges of first degree assault, first degree robbery and identity theft in the first degree and her bail has been set at $1million.