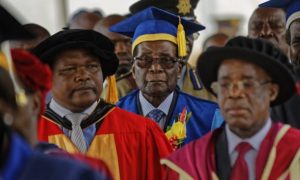 President of Zimbabwe, Robert Mugabe was seen for the first time at the graduation ceremony of Zimbabwe Open University in Harare on Friday morning, local media reports say.

The appearance was the long-ruling leader’s first since the army seized control of the country on Tuesday.

The 93-year-old appeared without his wife, Grace, and Higher and Tertiary education minister Jonathan Moyo, who is reportedly in the custody of the army, Zimbabwe Newsday reports.

Mr. Mugabe’s appearance came moments after the military said progress was being achieved in the ongoing negotiations between the embattled leader and military leaders.

Mr. Mugabe was placed on a house arrest following the coup on Tuesday, and was seen for the first time in a group photo with military leaders and negotiators on Thursday evening.

He has reportedly refused to step down, insisting he is the only legitimate leader of the country.