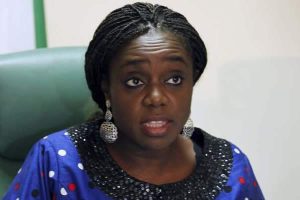 The Federal Government is targeting a revenue of $1bn from its tax amnesty programme, according to the Minister of Finance, Mrs Kemi Adeosun, she also added that the target might be exceeded as two companies had already paid $110m (N33.6bn at the official exchange rate of N305 per dollar).

“On the amount expected, we projected $1bn and we have already got $110m and that is just from two companies. So, we feel we might exceed that target,” the minister told State House correspondents at the end of the weekly meeting of the Federal Executive Council presided over by Vice President Yemi Osinbajo.

Adeosun said she presented a memorandum on the Voluntary Asset Declaration Bill to the council.

She disclosed that N1.5bn would be spent on advertising campaign for the Voluntary Asset Declaration Scheme for nine months.

The minister stated that the sum would cover advertisements on radio, television, online and in newspapers.

On the tax amnesty programme, she said the government had sent out over 500 letters in the first batch, and that there were thousands of Nigerians being targeted.

The minister said many people had reached out to the government, pleading for more time to pay.

Adeosun stated, “Most of the governors have agreed to give more time for people to make arrangements for payments.

“This is indeed a very good news for Nigeria as it will help reduce over-reliance on oil. It will improve our tax revenue so that whether oil prices are high or low, we will be able to provide basic services for our people.

“Very high net worth people are now being brought into the tax revenue profile. We hope to exceed the target that has been set.”

As part of the criteria used to get the first 500 who had received their letters, Adeosun said the government got information on land registry details from state governments and the Federal Capital Territory Administration.

She stated that information was also obtained from the Bank Verification Number and registration with the Corporate Affairs Commission.

The minister added, “If someone lives in Lagos and has properties in Kaduna, London etc., but only declares part, with these information, we will get them. We also looked at people who had come out in the Panama and Paradise papers. We looked at people who have companies being paid by the government but are not paying the right taxes.

“Even if you have not got a letter yet, do not think we have forgotten you. These are just the first 500, others will soon follow. It does not mean that we do not have you on our radar.”