The Honorable was said to have indirectly insulted his ex-wife who on Sunday, celebrated her 50th birthday and housewarming same day did not receive any celebratory message from her ex-husband. Makinde, who parted ways with his estranged wife seven years ago, posted a picture of his Facebook where he mocked her for not having any man beside her as she adds another year.

His post reads: “Today marks seven years of separation with that bit*h called Bola, she left by 6 a.m, Aregbesola became Governor by 9 a.m and it was also her birthday date…I understand she is celebrating 50 years today and also the opening of a new house in Ikorodu…. She must be preparing to dance but not with a man she can call her husband but just any man. What a life. Many reasons for me to appreciate God…Hon Rotimi Makinde.” 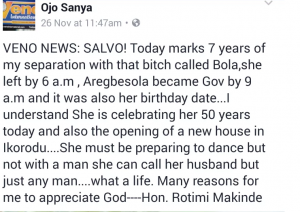 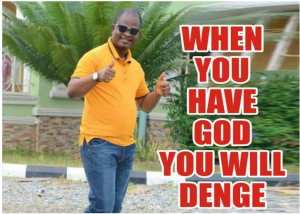 However this post has been deleted from his Facebook profile after he received from his followers on the social media platform. The post was also shared by Veno International magazine publisher on Facebook. Following this outburst, the lawmaker immediately granted an interview with Global Excellence were he denied ever making such a post. He added that his haters would have composed such text.

Makinde said: “The story was meant to portray me in a bad light. It was the figment of the writer’s imagination as I never uttered any destructive word against my former wife or ever wished her evil. My friends know that I am too refined for such. I am happily married to someone who is my angel and I believe the woman in question has also moved on with her life.” 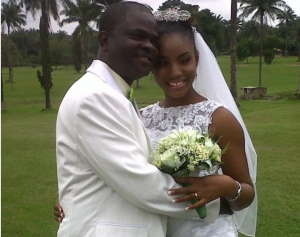 It could be recalled that after separating from his ex-wife, the lawmaker got married to a 23-year-old lady, Oyebanke Oyelami who was then a final year student of political science at the Obafemi Awolowo University, Ile Ife, Osun state. The couple has been married for about four years now and have two children together.