Home News Feed Abducted Teenage Girl Freed From Emir’s Palace
Facebook
Twitter
WhatsApp
An SS1 student of the Brighter Academy Secondary School, Gashua has been released after she was abducted by a Muslim boy. 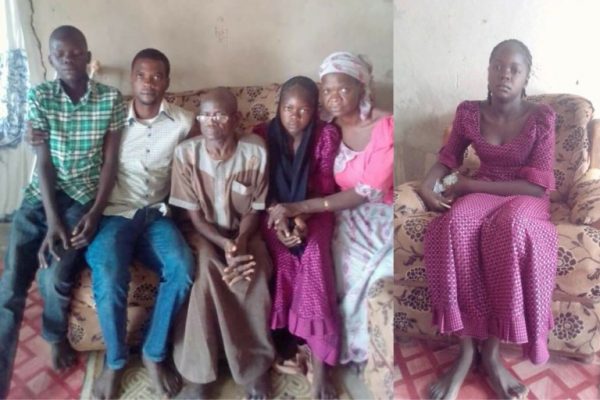 A 13-year-old, Hauwa Dadi, on Sunday regained her freedom, four days after being allegedly abducted for the purpose of forcing her into a marriage, Punch has reported.
The SS1 student of the Brighter Academy Secondary School, Gashua, is a daughter of a former Secretary of the Christian Association of Nigeria.
According to the report, she was abducted and allegedly kept at the palace of the Emir of Gashua for ‘Islamic evangelism.’
Hauwa was, however, released on Sunday from the palace of the Emir, Alhaji Abubakar Suleman.
A civil rights organisation, Stefanos Foundation, which blew the lid off the alleged plot to force the teenager into marriage, had vowed that it would pursue the case till the girl was released.
The Executive Director of SF, Mark Lipdo, had then appealed to the relevant authorities “to step in and help this poor woman who has been nursing her sick husband for the past six years.”
Hauwa’s elder brother, Jonathan Dadi, broke the news of her release to Northern City News in Jos on Sunday.
He said, “Thank you, Mr. Journalist, thank you, The PUNCH. I am pleased to inform you that my sister has been released to us.
“The Emir ordered that my sister, Hauwa Dadi, should be released to us. But we signed an undertaking that she should not be punished. We have just left the Emir’s palace. I will call you later to give you the details.”
Our correspondent reported that the Christian community and Evangelical Church Winning All in the Bade Local Government Area of Yobe State had been thrown into confusion, following the abduction of the teenager.
When contacted, the Gashua Police Area Commander, Joseph Aloefuna, confirmed that the case was brought to his knowledge by the Gashua Divisional Police Officer.
He said, “I wasn’t directly involved but the DPO said he was involved and he confirmed that he was invited into the matter.
“There was this boy who was said to have insisted on marrying the girl (Hauwa). They are in the same school. The matter was reported to the school management and the boy was punished and warned to stop harassing the girl.
“Later, the girl was abducted and the boy was the prime suspect. The boy was arrested but claimed that the girl ran to the Emir’s palace because she wanted to convert to Islam.
“The Emir took her to the Chief Imam; the Chief Imam said the girl was scared but he was asked to take her to the welfare officials instead of keeping her in his custody.
“We took the statement of everybody concerned. The Chief Imam said there was going to be a meeting on the matter,” Aloefuna explained.
Before her release, the mother of the girl, Deborah, had, in an interview, given a detailed account of how the abduction plot was perfected.
She said, “On Thursday afternoon, I had a meeting in ECWA Church, Gashua. Her twin brother, Zachariah, took wheelbarrow to fetch water for us. My daughter removed her uniform, put on her personal clothes and left. When one of her sisters asked her where she was going, Hauwa said she was going to fetch water with Zachariah and disappeared.
“But before the incident, there has been one boy who claimed to love her and wanted to marry her. He told her to convert to Islam.”
The mother said when she went to look for her daughter in the area, she heard that she had been abducted by her neighbours and was taken to the Imam of Gashua, Babu Alkali Mamman.
She then reported the matter to one Inspector Melody Habila at the Gashua Police Command.
But when Imam Alkali was invited to the police command, he pleaded to be allowed to take the Jumma’at prayers before coming but he never came.
Instead, the Imam’s lawyer later came to the police station and invited Deborah to the Emir’s palace.
When Deborah went to the palace, she was asked to come back, but on reaching there at 4pm, she was neither given her daughter nor allowed to see the Emir again.