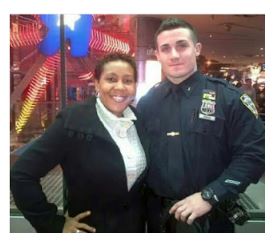 A New York Police Department (NYDP)  officer has described the Nigeria Police Force as one of the best in the world.

According to Nollywood actress, Shan George, the officer  said that Nigerian police officers works so effectively though they are less equipped and underpaid.

This is coming days after a report by the 2016 World Internal Security and Police (WISPI)  and the International Police Science Association (IPSA) ranked the Nigeria Police Force the worst in the world.