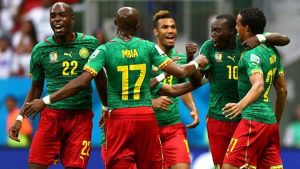 Stoppage time goal from Yves Banana was enough to salvage the Indomitable Lions  a 2-2 draw against Zambia on Saturday at the end of a disappointing Russia 2018 World Cup Group B campaign for the African champions.

Zambia teenager Patson Daka opened the scoring and set up Brian Mwila to put the hosts ahead again after Senegal had leveled before half time in the central city of Ndola.

The result meant the “Indomitable Lions” finished third in Group B with seven points, having won only one of their six matches, at home to off-form Algeria last month.