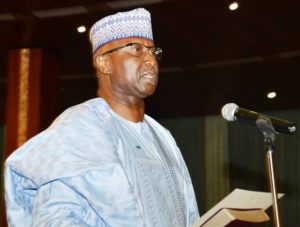 The All Progressives Congress, APC, said the appointment of new Secretary to Government of the Federation, SGF, had helped to address acrimony in government.

The party made this known in a statement by its National Publicity Secretary, Bolaji Abudullahi, on Friday in Abuja.

“Indeed, President Muhammadu Buhari has chosen a right man for the job; the era of acrimony that has slowed us down in the past is gone,’’ the party said.

It commended the SGF, Boss Mustapha, for his visit to its National Working Committee (NWC) members, adding that his earlier visit to the National Assembly had a positive impact.

This, the party noted, had reflected in the way the national assembly had been handling some outstanding issues since after the visit.

According to it, the SGF`s visit to the national assembly signified a new era in the relationship between the government and the party, and with other arms of government.

It, therefore, urged Mr. Mustapha to extend the interface to other government bodies.

Mr. Mustapha was appointed as the new SGF by President Muhammadu Buhari on October 30.

He replaced Babachair Lawal, who was sacked following allegation of fraud and abuse of office against him.