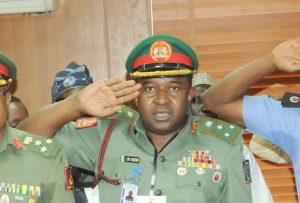 A General, who is the coordinator of peace keeping in the Ministry of Defense, Lym Hassan, has been secretly recorded allegedly threatening to ‘eliminate’ Pres. Buhari over a defense contract.

He was arraigned before the military court on October 30, 2017 and charged with two allegations: spreading rumours that Buhari was dead and demanding $600,000 bribe from a defence contractor.

It was earlier reported by “The Cable” that Buhari approved a $1,464,750 contract on September 26, 2016 for the relocation and refurbishment of Level 2 Ministry Hospital under the United Nations Multidimensional Integrated Stabilisation Mission in Mali (MINUSMA) following a directive from the UN.

In February 2017, the contract was awarded to Opems Integrated Concepts Ltd for $1 million for a two-month execution period ending April 2017. But the job was not done, with Nigeria failing to meet the August 2017 deadline for the relocation of the hospital.

The ministry of defence later issued a directive to serving military officers to go and execute the contract, which involved supply of medical equipment as well as dismantling and re-assembling the hospital at a new camp.

The bulk of the contract sum had allegedly been shared, and Hassan was said to have still demanded $600,000 from Opems. Unknown to Hassan, he was recorded while allegedly making the demand.

Asked by the contractor if he was not afraid of Buhari’s anti-corruption war, Hassan allegedly retorted: “If the president queries us, we will eliminate him.”

An insider in the defence ministry told TheCable: “With the charge sheet now reading that Hassan was spreading rumours that the president was dead, the game has changed. The facts of the matter have been tailored to throw him under the bus.
Attention – Police parade suspects arrested in Southern Kaduna for inciting violence.

Hassan has become the scapegoat but the bulk of the contract money was shared across board. He carelessly talked himself into trouble and he will carry the can for all those who participated in the bazaar.”