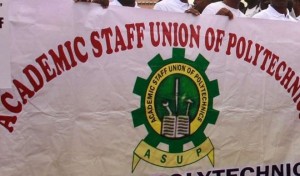 The Academic Staff Union of Polytechnics has vowed to embark on an indefinite strike with effect from Monday.

The decision was the outcome of the National Executive Council meeting of ASUP held on Saturday at the Kaduna Polytechnic, Kaduna State, ChannelsTV reported.

The industrial action follows the failure of the Federal Government to implement all the agreements it entered with the union since 2016.

The union lamented that despite the long period given to the government to address some of the issues it raised, the government did not consider it necessary to address the demands for improved funding of polytechnic education in the country.

Dutse, who noted that the union had given government sufficient time to implement all agreements, said they had no choice than to embark on an indefinite strike after the expiration of the 21-day ultimatum issued earlier.

According to him, some of the demands include non-implementation of the NEEDS Assessment Report and shortfalls in personnel releases and withdrawal of allowances.