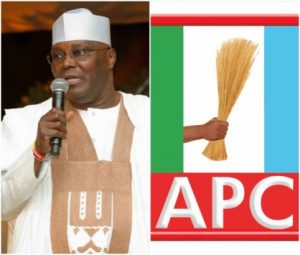 The caucus of the All Progressives Congress in the House of Representatives on Sunday disagreed with the former vice-president’s reasons for resigning from the ruling party.

The caucus disagreed with Atiku’s position that “factionalisation and lack of democratic principles” forced him out of the APC.

Part of Atiku’s statement had read, “While other parties have purged themselves of the arbitrariness and unconstitutionality that led to fractionalisation, the All Progressives Congress has adopted those same practices and even gone beyond them to institute a regime of a draconian clampdown on all forms of democracy within the party and the government it produced.”

But, the leader of the APC caucus in the House, Mr. Femi Gbajabiamila, told newsmen that Atiku was hasty in drawing his conclusion about the party.

He said, “Anytime any member of your family, in this case, political family leaves, you feel saddened. Also, we haven’t had an election as such since 2015 to determine whether or not there is democracy in the party. 2019 will determine that and I wish he had tarried a little while.”

The Chief Whip of the House and leader of the majority North-West caucus, Mr. Alhassan Ado-Doguwa, said Atiku misrepresented facts.

He said, “It is a clear misrepresentation of facts to accuse the APC and the President Muhammadu Buhari-led administration of being undemocratic.

I vehemently disagree with the former VP in this respect, especially when he is widely speculated to have defected to the Peoples Democratic Party, a party that was widely adjudged to be the most despotic and undemocratic party we have ever had in the history of Nigeria’s democracy.’’