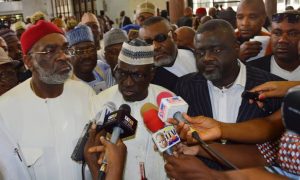 Former Vice president of Nigeria, Atiku Abubakar had been meeting with leaders of the PDP on Sunday, according to reports.

The News Agency of Nigeria reported on Sunday that the former number two citizen had met with members Adamawa PDP executive at all levels, as well as state chairmen from the six states that made up the North-East.

He was also said to have met with the PDP national vice-chairman in the North-East.

The Adamawa State PDP Secretary, Abdullahi Prambe, said, “The meetings have been fruitful.

“Our meetings with him (Atiku) have been fruitful and from his body language, he will soon return to the PDP.”

“With Atiku, the party will carry more weight and more people will come back.”