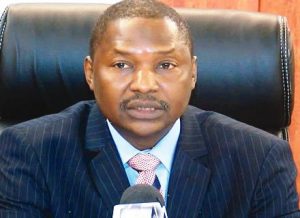 The Attorney-General of the Federation, Mr. Abubakar Malami, has denied that he ordered the reinstatement of the former Chairman Presidential Task Force on Pension Reforms, Mr. Abdulrasheed Maina.

The AGF, who appeared before an investigative panel of the House of Representatives in Abuja on Thursday, claimed that Maina’s case was “work in progress as of October 5” when it was reported that he had returned to office at the Ministry of Interior.