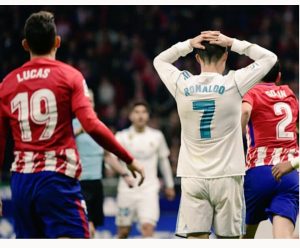 The Madrid Derby in Laliga yesterday ended  goalless which ensured Real Madrid and Atletico Madrid slipped 10 points behind Barcelona at the top of La Liga as a Madrid derby short on chances finished 0-0 at Atletico’s Wanda Metropolitano on Saturday.

Both Madrid sides suffered a familiar lack of cutting edge in front of goal this season, but it was Atletico who passed up the best chance when Angel Correa fired wide after just three minutes.

“We lacked a goal, but apart from that I feel for the players because they deserved more,” said Madrid coach Zinedine Zidane.

“10 points is a lot but that will change for sure because Barca will not always win and we will be in the running.”