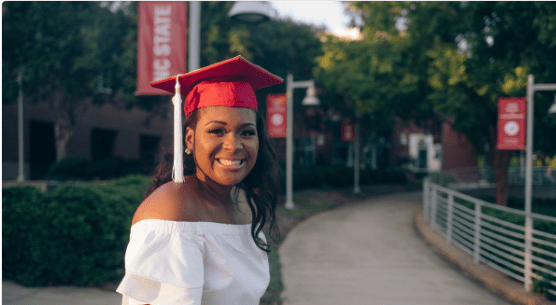 A student of the North Carolina University, Stephanie has shared her inspiring story as she’s set to graduate in few weeks time.

Stephanie who disclosed that she was raped in her sophomore year two years ago, said she had planned to kill herself on the night she was raped but her best friend saved her.

Read her Inspiring story below…

“During the fall semester of my sophomore year I went out to a party with my best friends. The night, which was filled with drinks, laughs and good times, slowly but surely led to events that would alter the course of my life.

When I returned from the party, I invited a friend over to stay the night. This friend and I had been out a few times, my parents trusted him and it wasn’t the first time he had spent the night.

I was exhausted and intoxicated but as he ran me a shower I remember vividly telling him that I had no intentions of having sex with him. Later that night I woke up with him on top of me, raping me without protection.

I cried, I asked him to stop and he told me to shh and let him finish. I cried but I laid there paralyzed. The next few days were a blur. I remember being a functional zombie for weeks.

For weeks, I withdrew from my friends and family members. I skipped class and missed work. I barely passed any of my classes and I seriously considered dropping out.

My energy was zapped as I saw my rapist everywhere. By mid second semester, he announced he was running for a very public position on campus. I watched as most of the black community, people I called friends, campaigned for my rapist.

On the night I planned to kill myself, my best friend saved my life. My other friend walked me to the counseling center the next day and thus began my journey to healing.

I’ve dedicated my existence to loving, laughing and helping others. I never imagined that I’d be graduating from one of the top institutions in the country or that I’d be addressing my graduating class as the commencement speaker.”