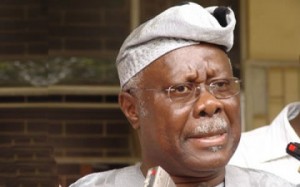 Former Deputy National Chairman of the Peoples Democratic Party ( PDP) , Chief Bode George, has told members of the party that it needs an experienced chairman to lead it to the next general elections.

George spoke in Abuja on Friday, shortly after obtaining his expression of interest and nomination forms at the party’s national headquarters.

He said it would be disastrous for the party to have someone who would be compromised ahead of the next general elections. In order to avoid a disastrous outing for the party, he said delegates to its national convention, scheduled to hold in Abuja on December 9, should elect someone who is dogged, bold and tested as the party’s leader.

He added that only a man who understood the party’s written and unwritten laws “is good enough for this critical time.”

He said, “We don’t have the time for trial now. We need those who know the constitution of the party; those who have the (right) courage and experience.

“All we can do is to market what we have done in the past and we also need a chairman that will avoid the mistakes and pitfalls of the past. So let’s do what is just, right and equitable. Nigerians want the PDP back.”

George added that “the country needs a vibrant opposition party. So we don’t need a chairman who will take just N1m and go to bed to sleep. In December, we shall confirm to Nigerians whether we are ready for 2019 or not.”

On the need to give the younger aspirants in the race a chance; George described his grey hairs as a “bank account,” an evidence of his wealth of ideas to reposition the party.

“Can we afford to have someone who has no experience, who has never been in charge of the party affairs to lead us at this time?” He asked.

In a related development, the Sultan of Sokoto, Alhaji Sa’ad Abubakar, has expressed hope that former Ogun State Governor, Otunba Gbenga Daniel, would succeed in his quest to emerge as the National Chairman of the PDP at the party’s forthcoming convention.

A statement on Friday by Daniel’s media team said the Sultan expressed his support when Daniel and his entourage visited him on Thursday in continuation of his nationwide consultation before the party’s convention.

The statement quoted the Sultan as saying, “Gbenga Daniel has been my very good friend since the days he was governor of Ogun (State). I remember the very good hospitality he affords me anytime I visit (ed) Ogun State.

“Gbenga Daniel, we all are praying for you to succeed in this quest and I am personally enjoining you not to forget the people when you get there.”

The monarch also advocated for a strong opposition, while urging politicians to be forthright in their dealings at all times.

According to the statement, the team also visited a former governor of Sokoto State, Alhaji Attahiru Bafarawa, who assured Daniel of his support.

Mailafia: Decision To Stop Sale Of FX To BDCs May Worsen Naira Value