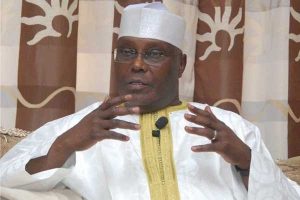 One  of the aspirants of the Peoples Democratic Party (PDP) , Bode Gorge, has called on former Vice President Atiku Abubakar to return to the PDP.

This was made known while addressing the  PDP supporters on Sunday in Katsina as part of his campaign tour to solicit support to actualise his aspiration.

“The former vice president is a landlord in the Peoples Democratic Party, as he was among the G-34 that established it.

“In the All Progressives Congress, Atiku is just a tenant that can be kicked out any time the landlord wants.

“But in the PDP, nobody can kick Atiku out because he has laboured for the establishment of the party.

“Just because your house is leaking, you cannot abandon it and move to a rented house,” he said.

The PDP stalwart urged party members to close rank and do the right thing as the December 9 convention date approaches.

“If we miss to select the right leaders during our convention, then we cannot do anything tangible in 2019 general elections,” he said.

George appealed to all members of the party to avoid the in-house fighting that had so far divided them.